Of course, and I was glad to help her out. She then told me a little more about her story.

She then hired a mold inspector to come to do a thorough look at her home. Among other things, the inspector took air samples using spore traps (find out about mold test methods here) and also used a moisture meter to look for hidden mold. However, the moisture tests and air tests didn’t show any significant sources and she still was feeling sick.

Searching for the issue

I took a look at her mold inspection report as well as the report from her gravity plate testing, and I noticed a few things.

First, in the master bedroom/master bath, the mold inspector found low levels of Chaetomium/Stachybotrys, one of the worst mycotoxins for health. The gravity plates showed Rhodotorual too numerous to count. So these were a “smoking gun” pointing to the fact that there was another problem. I also discovered the inspector did a type of test that would have missed moisture content behind some kind of walls. Then she told me, she felt sick often after she took a shower.

This led me to suspect there was a problem in the shower. So we hopped on a FaceTime call and she showed me this: 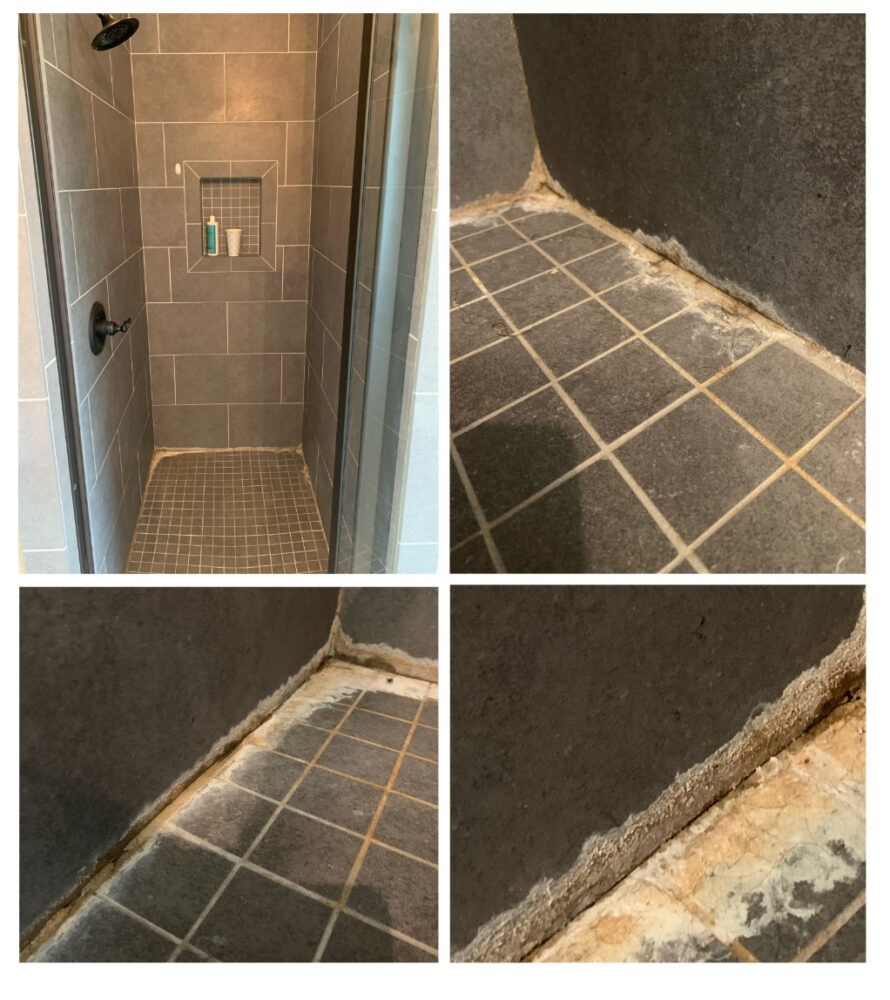 When I looked at the shower I saw mineral deposits, and gaps in the grout, telling signs that there is mold growth behind the shower. Because of the grout gaps, water is getting behind the tiles. When a water intrusion isn’t dried within 48 hours, mold begins to grow. In the case of this shower, it looks like it had been going unchecked for years and this was making her sick.

The life of mold

Without getting overly technical, it helps to understand how mold forms and grows. After a water intrusion doesn’t dry out, this happens:

The first week – non-toxic mold forms: Microsporum, Cladosporium,
After the second week – toxic molds being to grow: Aspergillus and Penicillium,
After a month – more toxic mold, Chaetomium and Stachybotrys start to grow, and it will eventually kill off the other mold.

After seeing her shower, I saw clearly what low levels of Chaetomium were showing up on the spore trap and the gravity plates showed Rhodotoruala, and why she was feeling sick after a shower.

So why were the levels of Chaetomium so low? It’s because that mold was fat, happy, and content behind the shower tiles.

Mold is like a dandelion in your yard. Only when you blow on it or kick it, does it spread around. Mold is just like that. Unless you disturb it, it won’t spit out spores. But even if you don’t stir up the mold, it gives off mycotoxins and MVOCs (Microbial Volatile Organic Compounds). MVOCs are responsible the musty odor you’ve probably smelled and they are a byproduct of mold feeding and growing. If you smell the musty odor, you have mold. The trick is finding where it is coming from. In this case, it just took a FaceTime Call and some other clues to find the hidden mold.

Options for dealing with the problem

Back to my story. Unfortunately, she was living in a rental property and the options I gave her were limited:

Ask the homeowner to remove the tiles and properly contain them. A minimum of 4 feet down. Sadly, not a lot of property owners of rentals are going to do this.

If your health is affected and you have run out of options, it’s time to look for another place to move to. In the meantime, treat the area with HavenFog and HavenMist, as they will at least keep the mold under control.

But there is hope for dealing with sneaky mold

I think the takeaway for you, is to understand that mold is sneaky and pinpointing the source isn’t always easy.

The interpretation of the mold test is critical and it often takes someone who deals with mold every day. I should be promoting BioBalance here, but our treatment is only part of the solution. We focus on getting mold under control, but there is no substitute for a good mold expert. If you are looking for a DIY option, I can’t recommend my friends at ImmunoLytics lab enough, as they offer affordable gravity plate mold testing and offer some great advice as well. Of course, you can always contact us if you have a stubborn problem. We are here to help.